I was awake at 4.30am today (cheers jet-lag!) and as I was also (oddly!) full of energy, I grabbed a coffee and plonked self in front of the big window, to watch the sun come up at 6.20.

The most beautiful sunrise I ever saw, was in Uganda about 8 years ago. We were there with a crew from ITV making a documentary about HIV and Aids. We’d had 3 hugely long, hot and dusty days of filming, when the beloved producer suggested getting up early, to climb a hill and watch the sun come up.

“I’d be delighted to..” I said with a murderous, gritted-teeth smile.

But in the end, I’m glad I did haul self out of bed at 4.45am, because as we stood there overlooking a collection of villages which had been rampaged by Aids, little whispery tendons of orange started to streak the sky, followed by hues of blues and greens, till the sun was resolutely in the sky.

We mostly didn’t say a word, just stood there, watching, probably most of us thinking about some of the tragedy we’d seen that week….but for me at least, it seemed like God was saying, “despite all the tragedy you’ve seen, I am still at work, I’m still here…I still make the sun come up each day…”

This morning as I drank coffee and watched the sun show its face over (the slightly less beautiful) Stoke-on-Trent, I was mulling over bits of Psalm 19 which I read the other day;

PSALMS 19:1-7 CEV
“The heavens keep telling the wonders of God, and the skies declare what he has done. Each day informs the following day; each night announces to the next. They don’t speak a word, and there is never the sound of a voice. Yet their message reaches all the earth, and it travels around the world. In the heavens a tent is set up for the sun.”

My favourite bit is the simple message, that God doesn’t have to say a word, because creation does it for Him. And when I see a sunrise or a sunset or stand in a doorway while a huge tropical storm rages, it knocks all of life’s dramas into perspective. It doesn’t necessarily give us answers, but to me at least, it’s God saying, “I’m still in control…I’ve got ya…” 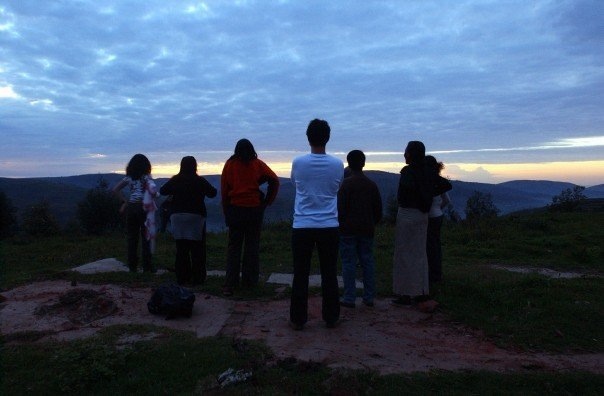