I quite like the snow; the perfect blankety whiteness first thing in the morning,  kids being pushed/pulled in sleds and the sheepish smiles and the feeling of, ‘we’re in this together’ between neighbours, as we tramp through the snow drifts.

This morning, I stepped out into aforementioned ‘perfect blankety whiteness’ and stopped to take a picture of trees, field, my car, not twigging initially that my car’s wing mirror was hanging pathetically and sadly, in a position that wing mirrors are not meant to hang.

A closer, horrified look and I discovered someone had taken a hammer or screw driver and smashed a big hole in the casing, knocking it off its perch, severing the electrics and making me feel very, very, VERY cross.

So ok, I knew the ‘correct’ response was to take it in my stride and not let it spoil my day, but it was tough, knowing I’d be facing a big bill to repair it, just because some mean-spirited person took out their aggression on my poor car.

As I sat in the car and waited for it to de-ice, I rang my dad and had a bit of whinge.   Funnny thing is, the exact same thing happened to him just a few weeks ago, so he understood the initial feelings of fury and the slight accompanying depression when some of your stuff has been mindlessly vandalised.

Dad’s advice was simple – I had a choice.    I could let it wind me up and wreck my day OR I could release it, pray for the person who’d done such a thing, and then move on with my day.

I suppose he was right – I had a really busy day ahead at work and what was the point of spoiling it all, because of some prat with a screwdriver and nothing better to do?

And so I prayed for him/her/

I’d love to say I prayed holy prayers of blessing and health and well-being on the poor/soul, but in reality it was more of a gritted teeth, ‘God, CONVICT this person SO much, that they will not be able to sleep for a week….and uhm, erm, then come to know you’ sort of prayer.

But hey, better than no prayer at all, right?

In the end, by the time I got to work (through snow, sleet and wind), I’d mostly forgotten about it and strangely, my heart was calm.   I had several offers from lovely, chivalrous chaps to tape it up and fix it for me (it’s now gaffer taped and wrapped in a white plastic bag) AND, I found a local bloke who will repair it, without too much drama or cash being handed over.

Annoying yes, but did it wreck my day….?

Cheers dad, for the excellent advice. 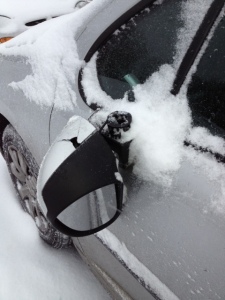 2 replies to Snow , sleet, ice and plenty of murderous thoughts.