About 7 or 8 years ago, when I worked for an aid agency, there were terrible reports filtering through of a looming food crisis in Turkana, Northern Kenya.

Turkana is a really dry and arid place (one of the hottest parts of Kenya…and trust me, that’s HOT!) and the chief occupation there is herding and selling cattle. But when a long drought hits, the grass dies, the crops fail, the cows starve…and if the cows starve, people no longer have anything to sell, so they lose their jobs, they can’t eat…and sooner or later, they too start to die.

Things seemed to be getting worse, people were on the move (a sure sign that food was running out) so we hastily booked some flights and I flew out, along with the actor Stefan Booth and a film crew, to see what was going on.

The trip itself was one of the more difficult and memorable media trips I did. Turkana is quite remote so we had to charter a plane to get us from Nairobi to the little (unlit) strip that our pilot assured us WAS a runway. We knew he was telling the truth, because parked by the side of the strip was a little plane, bent in two in the middle, after a crash. 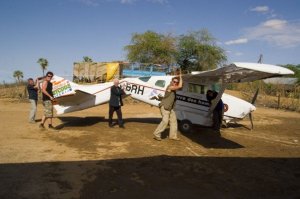 Anyway, the next 24 hours turned out to be incredibly tough. We were invited into a fairly remote community and were told some horrific stories of suffering. One older man got up and led us to a big pile of dried bushes and leaves. He told us this was the grave of his 6 year old son who’d starved to death just a month before. We stood there in abject, horrified silence, knowing that any words were completely pointless.

Later, we went to a food distribution centre, where people were forming orderly queues to get sacks of grain and bottles of oil. That day sticks in my memory because in the queue, was a lady who was mentally ill – she was rocking and her eerie wails filled the air…others just looked at her, too tired and hopeless, to do anything to quiet her. Having to queue up for food when you’ve lost everything is not only exhausting, but must be right up there on the scale of unimaginable human indignity.

Flying home after a week away was a weird mixture of releif and guilt. Stefan was fortunate in some ways because he went home and got to talk about it on Loose Women, This Morning, ITN…but even though we knew the media coverage had the power to make a big difference, we felt a bit powerless and wanted to do more. But what? Where do you even begin, if you want to cure a problem like a drought?

Anyway last night, Stefan sent me this news article (below) and all the memories of that trip came flooding back; the sight of rotting cows lying by the side of the road, the loss of hope and sadness in people’s eyes.

But, despite all that suffering, it seems that today, there might be Hope for Turkana

Thought-provoking too, to realise that the water was there all along. It just couldn’t be seen. It doesn’t lessen the pain of the man who lost his little boy or all the others who suffered so much…but knowing that it won’t keep happening, must bring some kind of relief?

It makes me think more broadly about life here too. Maybe the answer, the hope we need to make it through certain situations is already staring us in the face? If we knew that the answer was beneath our feet, would we live life any differently?

No answers from me…just a few musings, after reading a news article which made my day. 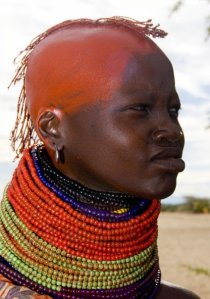