Oh Netflix, how I love thee.  Ever since I discovered the joy of US drama boxsets, I’ve been gripped by The Good Wife, Greys and more recently (and somewhat darker), the US version of House of Cards.

Many of the dramas usually start out innocently enough; great plot, quirky characters mixed up with a few scattered bits of swearing, the odd implied bit of sex, but nothing too horrendously graphic.

But then maybe in an attempt to keep viewers interested as they grind on into the very lucrative seasons 4…5….7….9….the swearing, sex and violence gradually gets worse.  Except me, poor dummy, sitting there like a frog being gently boiled in a pot, I haven’t really noticed.

Well, not until the other night at least.  I got in late, switched on the TV as dinner cooked and then almost without warning, as the episode started, there was this really nasty, violent sex scene.  I scrambled for the remote (did not want to see that) but it was too late, the violence was now stuck firmly in my head.

Switched TV off, ate dinner, made a cuppa but that last scene was whirling round brain like a sack of clothes in a washer.  Violence, gore, and aggressive, guttural swearing.  The series hadn’t shown anything like this before…but maybe it was slowly building up to this nasty, grim point?

All of a sudden, I realised that my TV viewing had caught up with me.  I’d sat there over a collective period of many weeks, quietly breathing in a culture completely alien to God’s, innocently  consenting to my brain being filled with total rubbish.   Had it been a non-stop gore-fest from the beginning, I wouldn’t have watched.  But instead, it happened subtly, gradually…all the while my head was being de-sensitised to the (let’s be honest) totally moral-less plot line.

It took the sudden unexpected violence last night (and a mad dash between the cushions for a wayward remote control) to remind me of the old saying;

Garbage in, garbage out.

In other words, the reverse of Philippians 4, which gently suggests that I’ll ‘do best by filling my mind and meditating on things true, noble, reputable, authentic, compelling, gracious—the best, not the worst; the beautiful, not the ugly; things to praise, not things to curse.‘

I’m not a prude or a religious nut.  I’ve never tried to isolate myself from the culture around me, and if I wanted fluffy, happy movies, I’d keep the TV permanently tuned to Disney.   That’s not what I want, but at the same time, I also don’t want my thinking to be shaped by a TV series that says God is irrelevant (or at best, a spiteful, nasty bully), or that we should live our lives for what we want, and nothing else.   In other words, a belief system which is completely at odds with the message of peace and hope.

The Bible seems to say that filling my mind with rubbish, can only result in rubbish being spewed out.

Garbage in, garbage out.

I used to laugh as a kid when my youth group leader said that.  But I’m looking at the broken world around me, and wondering if maybe he had a point? 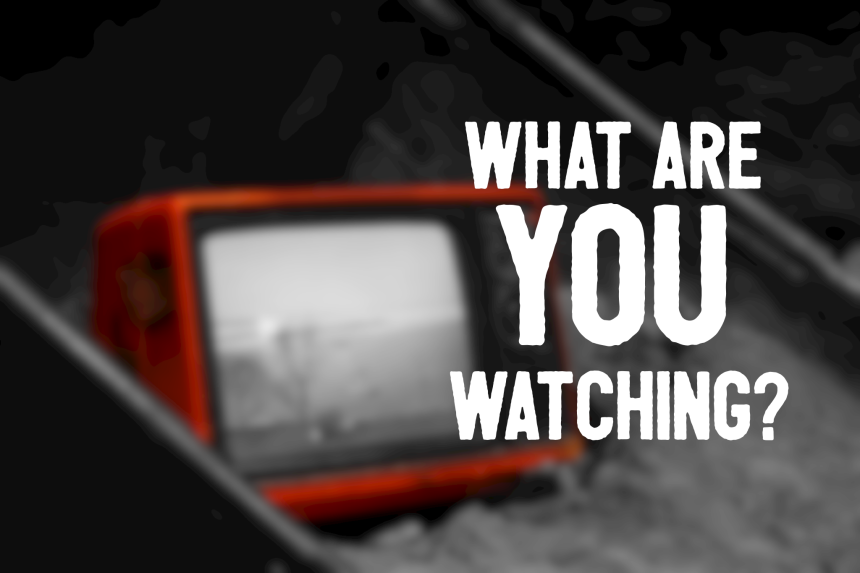 2 replies to What are you watching?