Years ago, I had a strange and unusual experience with God; an experience that changed everything.

At the time I was an annoying, anger-filled teenager.  I’d grown up in church, and believed deep down that everything I’d been taught was true, but I was still filled with irritation at the petty, pointless politics and all the arguments in church. I remember on one occasion, refusing to stand up during the worship service.  I’m not entirely sure what I thought my mini protest would achieve, but I wasn’t bothered, I just needed to express my frustration.

A few months later, my dad booked us all into a Christian conference in Blackpool.  The conference was meant to be one of a kind, headlined by a famous US evangelist.  We’d stay at a luxury seafront hotel, have great food and fantastic teaching which would change our lives.  For my parents, it was a financial stretch but a commitment they thought was worth making.

When we arrived, the accommodation was anything but luxury. It was in a huge hotel which reeked of faded glory. We had an adjoining family room – there was mold on the walls and the wardrobe doors were hanging off.  I recall hearing my mum on the phone to the reception desk, listing the awful problems with the rooms, from the dirty carpets to the windows which wouldn’t open. To add insult to injury, the famous guest speaker then cancelled his visit, citing ‘legal problems’ and the whole holiday looked like it would be an unmitigated disaster.   For my poor parents, who’d sacrificed a lot to be there, they must have felt deeply disappointed.  But God still had a plan…there was more to come.

Despite it all, we decided to stay for the rest of the week and I was told there were ‘special’ youth meetings being held in one of the hotel suites.  After some parental persuasion, I finally, reluctantly trudged down the steps to the dingily decorated ballroom and sat on the back row, arms folded rebelliously while I quietly observed what was going on.   There was worship and I heard (for the first time), More love, more power…more of you in my life.   There seemed to be no hysterics, no politics, just people my age who wanted the inexplicable.

Despite my annoyance, I couldn’t deny it, there was something there; a lightness, a freshness. I didn’t know what it was specifically, except somehow I knew it was God’s presence and I wanted it too.

That night, back in the dingy hotel room, I had a haunting dream; God was calling me and I was looking for Him but couldn’t find Him.  The next day, I couldn’t shake the feeling that somehow God wanted me in those meetings, so still slightly reluctantly, I stomped back to the ballroom. And that’s when things really began to change.

That night, I dared to raise my hands in worship in this strange, alive atmosphere. I can’t describe it any other way except to say I was alive, something wanted to capture my heart, my soul, my everything.  I remember someone praying for me and I fell over.  It wasn’t a dramatic, fake over-the-top thing, just this incredible sense of being in the presence of a holy King.   In the presence of perfect, pure holiness, what else can you do?

I went back the next night and the next. The leaders prayed over me and there were prophecies of things in the future that are best left unsaid.  But I was left with this tangible need and desire to know God more. Being on the seafront was the perfect location to do that and the next afternoon, though it was raining, I remember walking along a murky, isolated beachfront, talking to my Heavenly Father like I’d never talked to Hin before.  For the first time in my life, I knew He was real.  I knew He cared and had things planned for me that I couldn’t yet imagine.

Since that time, I can’t say our relationship has been plain-sailing. There’s been times of heartache and loss, times where I’ve questioned everything, wondered why certain things had to happen, but I’ve never lost that sense, that awareness of God’s presence in my life.

Since that rainy day on a Blackpool beach, where I first really discovered God’s presence, He’s never once left me. And I know He never will. 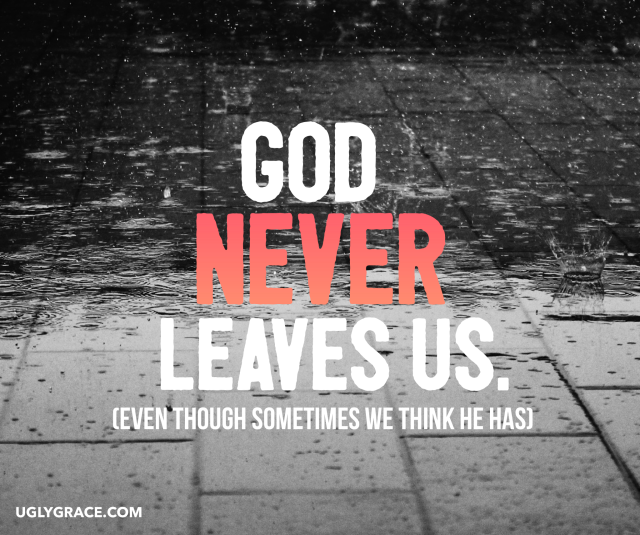