I love the Old Testament. I know that  many people think the OT is the dry, dusty bit of the Bible, stuffed full of battles and endless genealogies.

I won’t fib, it’s true, there are battles and (seemingly endless) genealogies, but if you look closely, there are also stories jam-packed with little clues and insights into God’s character.

God had promised Moses and the exiled people that He had a home for them.  They’d spent a long time on the move, upping sticks (and homes) every time an aggressor raised an angry fist, or when hard times struck.

But there on the horizon was this vague, tantalising hope that one day, they’d be able to settle down.  One day everything would be ok.

Know that feeling? Waiting for ‘one day’? One day when everything will be ok. You’ll be safe. You’ll be well.  Your kids will have grown up.  You’ll be married. One day…

And so it seemed for the Israelites that ‘one day’ had finally arrived.  They’d reached the land of Canaan and God told Moses to send in some spies to check things out.  Moses carefully selected one man from each tribe and so 12 of them set off to take a sneaky look at this supposed ‘promised land’.

Canaan turned out to be everything they thought and prayed it would be.  A little like viewing a new home for the first time, they just couldn’t believe their eyes that it was this good.

Numbers 13 says there was a massive supply of fresh fruit growing everywhere; grapes so big that a cluster had to be carried on a pole between two men, figs, pomegranates, the whole shebang.

After 40 days, the spies came back to Moses and the rest of the people, full of excitement about this land, ‘flowing with milk and honey’.

Caleb (one of the spies) said, ‘We need to go, we need to take this land NOW.  No messing about, let’s do it’.

But, suddenly (out of the blue) some of the spies started to murmur their fears.  The land was great, they acknowledged.  But, the people were HUGE.  They were descendants of Anak, giants, known for (charmingly) ripping the heads off their enemies.

‘They’re too strong’, the other spies said. ‘They’ll slaughter us, there is NO way we’ll be able to conquer them’.

The assembled crowd started to wail. They were devastated.  They thought this was it, that they’d finally found their home.  They were tired and sick of wandering, waiting, being rootless.  Their hopes had been raised by the sight of giant fruit and initially happy reports, only to be bitterly dashed by the apparent facts.

It seems that only two of the spies, Joshua and Caleb, were willing to take the risk.  They tried shouting above the din of grief-stricken weeping;

‘But the Lord is WITH US!!’ He will give us this land…we know it…we just have to keep our hearts right…He’ll help us. Please believe us??’

But the people screamed in frustration all the louder and even started to hurl rocks at Joshua and Caleb.  They didn’t want to hear the good news.

Perhaps it was easier to believe the bad.

40 years of wandering homeless because they simply could not believe the good reports of two positive, God-fearing men.

I’ve no idea what Joshua and Caleb felt and experienced during that time.  It would have been easy to have become bitter and angry at the hardheaded people.  They knew down to their boots, that somehow God would give them the victory, but no one believed them.

‘Things are not as bad as you think they are.’  They would say.  We’ve got to trust God, He can see the bigger picture here…He’ll help us’.

But they might as well have preached to a stone wall.  The people were not for turning.

There’s so much truth in this short and sweet story.

How often do we choose to believe (and focus on) the bad news, rather than the good news?

How often do we choose to do things our own way, instead of the riskier (but more rewarding) God-way?

How often do we waste years, wandering (figuratively) around in No-Mans land, due to our own stubbornness?

How often do we look at the giants and say, ‘I am too small, too weak, too rubbish…this is too big.  I will never conquer this.

And yet all the while, God could be saying;

‘Trust me…things are not as bad as you think they are. Take a step forward and you will see.

There is nothing to fear.  I will be with you’. 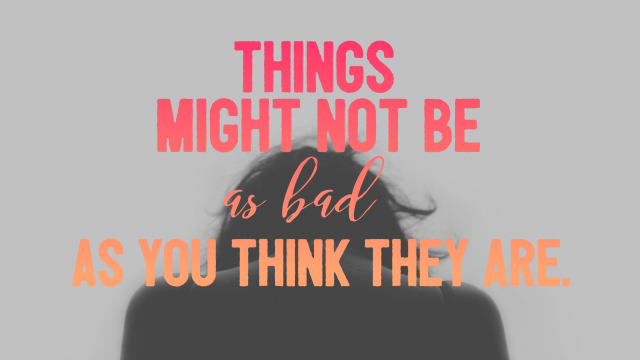