Two Sundays ago, as I was leaving church, I got a phone call to say my dad was on the way to hospital, after developing chest pain. We found out later that evening, that he’d had a heart attack.

My dad’s had quite a few heart challenges over the years. In his early 40s, he was diagnosed with coronary artery disease and since then, there’s been open heart surgery, stents and a few other cardiac nuisances along the way.

After a round of blood tests, later that night he was admitted to hospital and the following day, was sent for a scan to see how his arteries were performing.

On Wednesday, the cardiologist told him the scan showed ‘narrowing’ in two of the arteries which had been repaired years before. This wasn’t the news we wanted to hear (especially a week before Christmas) but we rallied lots of friends to pray and knew we could trust God to walk with us, through it all.

On Wednesday night, as I was leaving work to head to the hospital, a colleague prayed with me. She reminded me of something she’d heard recently about healing – there’s the facts, the logic, the diagnosis and THEN there’s the truth, God’s truth.

If you’re diagnosed with an illness, you can’t deny facts and pretend it’s not there, but you CAN declare God’s truth over the situation. God’s truth is always bigger, higher, more powerful than the facts.

After praying together, I got in the car to drive 50 miles to the hospital. Before leaving, I switched on a Revive church podcast for the journey. I didn’t know what the teaching was about, it was just called Seated but I clicked it on anyway.

About half way through, (as I was zipping up the M6), the speaker said the exact same thing…’there’s the facts and then there’s the truth. Today, declare the truth, that God is a healer, that with him, nothing is impossible’.

Twice in one night? God was definitely saying something, so as the podcast came to an end, I started praying what seemed like an impossibly huge prayer.

The facts say my dad has problems with his arteries, but the TRUTH says that God can heal him, restore him and put this right. And taking a bit of a bold step, I prayed really specifically that when they did further tests, the narrowing would be gone.

20 minutes later, as I pulled into the hospital and walked down the sterile smelling corridors to CCU, I’ll admit, all my fiery car praying now seemed a bit daft.

I was being literally confronted with the real life facts, the beeping monitors, sick people in beds, the nurses rushing about…the reality of patient life in Coronary Care.

But dad seemed to be in good spirits and as we eventually got up to leave, we prayed again with him, the truth OVER the facts. Although we’re deeply thankful for and respectful of science, the truth of what God says is more important than a medical diagnosis.

Fast forward to Friday, dad was booked in for an angiogram. For the unacquainted, this is where they thread a tiny catheter to the heart through an artery, looking for blockages. Because medicine is so wonderful, they can usually fix the blockages by implanting metal stents at the same time. Dad was told in advance that if they could fix it, they would try to, but there were no guarantees.

It was a nervy day for all of us. I was at work, keeping busy and kept in regular contact with the rest of the family and everyone else who was lifting him up in prayer.

Finally at 4pm, he went down to theatre and was released (hurrah!) at around 5.30pm. My mum rang me just afterwards to say that dad was out and recovering.

Guess what they found?

No narrowing…just a stent from a previous procedure which needed to be replaced.

But what of this narrowing they’d found in the CT scan?

What I DO know is that God called a small army of people together to pray for the narrowing to be gone. And it was!

God reminded us again too that his word, his truth always stands head and shoulders above the facts the world offers to us.

Yes, my dad is alive all these years later, thanks to brilliant medical minds and incredible drugs, but there is only so much they can do. And when it comes down to it, I’d rather be putting my hope in God’s life-giving word and truth, than in human facts.

I don’t pretend to have all the answers. I don’t know why some people experience healing and why others do not, but I am learning so much on the journey;

1. Don’t ever be afraid to pray, big, audacious, ‘impossible’ prayers.

2. Listen to the facts, do what the doctor says, take the medicine, do the treatment, but accept and absorb the truth. The truth of what God says, plants joy in our hearts. That’s what gives us the strength to keep putting one foot in front of the other.

3. Don’t be surprised when it works. Speaking to myself here, as much as anyone! When I was first told the results of the angiogram, my first comments were, ‘so there was nothing there? They were fine? How’s that even possible?’

If you’re waiting for your own breakthrough or healing this year, hope this answer to prayer, encourages you.

God is still very much in the business of answering prayer. 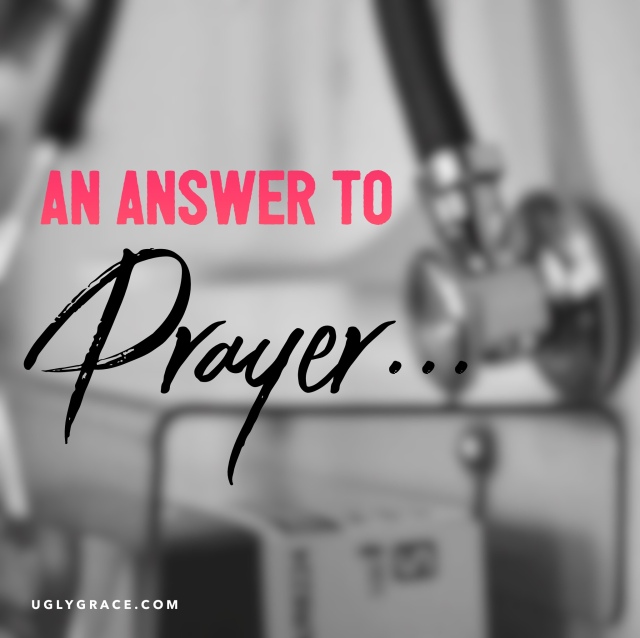