I grew up in the church. Church has always been my home and my safe place and I knew from an early age the dangers of becoming a ‘church hopper’. There was a frequently used analogy, ‘a coal out of the fire, on the hearth, quickly goes cold.’

And I think that’s true, being part of a church, for a believer, is pretty important and when you’re not in a community, it’s much tougher to keep ‘warm’.

But what happens if you find yourself without a church home?

Well, last year, through a variety of painful unforeseen circumstances, I found myself in that very situation.

Mentally picturing coals and slowly dying embers, I quickly drew up a shortlist of nearby churches which seemed to fit the bill and over the course of a few Sundays, I nervously started the arduous task of visiting them.

To be honest, it was not an easy or fun experience and there were plenty of mornings where I’d much rather have stayed in bed. But, I know that great things often happen when we take small, sometimes awkward steps of obedience, so I somehow found the gumption to persevere.

However, the whole process made me think about what makes a ‘good’ church. Is it the worship style? The speaker? The band? Or something else?

As I visited one church after another, I began to realise that it was less about style, building or type of worship, but, like any new relationship or buying a house, for me, it’s mostly about chemistry.

It’s either there or it’s not.

You fit or you don’t.

It feels right, or it doesn’t.

So much of life is like that. A new house can look perfect on paper but ‘feel wrong’ and an old, crumbling ruin can look terrible, but yet somehow you’re energised and ready for the challenge. That’s chemistry.

But, despite it all, there are still some things that churches could do (or maybe NOT do!) which could make the experience of first time visitors a bit easier.

And so I write this as a bit of an open letter to all kinds of churches. This isn’t intended to be a criticism of the church and also, I know that church is equally about what I can give, not just what I can get.  I hope though, that it’ll encourage you to think about what your church might look like, to a first time visitor.

First things first, if your church building is hard to find and not obviously signposted off a main road, then please write signs, buy flags and do things which say in bold, loud lettering, ‘Yoo hoo…we’re OVER HERE!’

I can’t tell you the amount of times I’ve driven round endlessly in circles, trying to find a building which was tucked away in a corner with no obvious signs (all the while, fearing my detours would make me horribly late).

Is it obvious where your church is?

The welcome is everything. Walking into a new church for the first time is a bit difficult for most people.

Where will we sit? Will anyone talk to us?

Your welcomers on the door need to be the kind of people who are genuinely interested in other humans. If they’re talking to each other and not making eye contact with the people who walk through the door, I’d dare to suggest they’re doing it wrong.

Welcoming is the equivalent of triage at A&E. The welcomers should be the people who are actively on the lookout for the newbies, for the shy, the nervous, the first-timers.

I visited one church on my own and two welcomers gave me bright smiles and asked my name. One lady in particular just ‘got it’. She asked if I wanted to be left alone or would I like to sit with someone, emphasising there was no pressure. When I said I didn’t mind either way, she then introduced me to her friend, who said cheerily, ‘hey, come sit by us’ and she immediately made me feel at ease.

Within minutes, the awkwardness had subsided and I was free to take part, observe and figure out if this was the church for me. As it turned out, it wasn’t, but I certainly couldn’t fault the welcome.

One church visit will always stick out, just simply because of its weirdness.

I’m pretty sure that when the speaker planned her talk, it looked fine on paper. In practice however, it was an all together much more awkward affair.

The talk, on the whole, was good, all about seeing the image of God in others, encouraging us to be less judgemental and more accepting of the people in our lives who might otherwise irritate us.

All good, all pretty challenging so far.

And then, there was an exercise.

In the middle of the preach, she asked us to stand up, face the person next to us and ‘examine their face’ for the image of God.

As these words fell from her lips, my heart sank.

Seriously? Nooooooooo? (I didn’t say this out loud)

But I was stuck. Not taking part would have seemed churlish, so, a beetroot blush creeping up my face, I turned to the woman on my left to see if she had ‘the image of God’. Yep, all looked good to me, so surely this part was now over?

But oh no, there was more.

We were then encouraged to say what we saw, say something positive about the person. I mean, sure, I’d be happy to do this if I knew her, but I didn’t even know her name.

Incidentally, I noted the speaker herself was NOT staring into the eyes of another congregant. Nope, it was ok for her (ha!). She was holding her mic and watching the rest of us, as we shifted uncomfortably and sheepishly tried to get this over and done with.

‘Are you staying for coffee?’ said nice-woman-on-the-left, at the end of the service.

Fearing another onslaught of being forced to stare deeply into strangers’ eyes,  I politely declined.

The sigh of relief as I walked out the door and sank into the comforting embrace of my car, could have been heard a mile away.

Don’t make them do weird stuff, don’t ask them to stand up, say their name, hug someone or force them to make awkward prolonged eye contact with the person next to them.

And alas, on quite a few occasions, that’s what’s happened. There’s been times where I have slipped in to the back of a new church, smiled at a few turned heads, tried to make myself look approachable, but by the end, no one spoke to me at all.

You might think I should have tried harder? Perhaps so, but I tend to think that on a first visit, it’s better to be approached. After all, I’m a guest in your house and bouncing up to people to introduce myself, feels a little like helping myself to the food in your fridge, when I’ve only just walked into your home.

Why not encourage your church members to not just gravitate to the people they know, but to be on the active lookout for the faces they don’t recognise?  A simple ‘hello’ and a handshake makes a massive difference. Being completely overlooked (even if it’s not at all intentional) is not fun at all.

Why the personal questions?

This is a tough one! But one of the downsides to attending a new church is sometimes, the barrage of personal questions. I completely understand that people are trying to be friendly, to reach out and I’m grateful that people try, but the questions that no one ever wants to answer on a first visit are, ‘Are you married?’ Do you have children?’ Followed up swiftly by, ‘how old are you, if you don’t mind me asking?’

(Well, now you mention it, I DO mind you asking).

One of my friends is a single parent and on one occasion, visited a church with her young daughter. A well-meaning greeter asked, ‘oh, is your husband not with you?’

What she wanted to say: No, he’s with his new wife today, the woman he left me for.

They’re not things anyone wants to go into on a first visit.  So, as a church, if you can, why not encourage your congregation to accept people for who they appear to be, without needing to immediately put a label on them. Ask your visitors where they’ve travelled from, if they’d like a coffee, whether they want to sit next to someone (or be left alone), but don’t get too personal, too fast.

I’m not a heathen

Talking of awkward questions, I’ve noticed that if you’re new to a church, there is sometimes an assumption that you’re not actually a Christian.

Well-meaning church members have quietly pushed Alpha leaflets into my hands and on one particular occasion, the minister gave a lengthy appeal at the end of the service and stared meaningfully at me the entire time. The stare was so intense, that I began to wonder if I maybe needed to rededicate my life, you know, just to help him out and bring it to an end.

I’d rather not give you my data

We recently visited a church where one of the welcomers, followed us round the auditorium to try and persuade us to fill in a visitors’ card.  At one point, he was so politely insistent, I wondered if he was on commission.

He asked when we walked in. He asked again during the ‘meet and greet’ and at the end of the service, he waved at us for a fourth time, promising us the church would not misuse our data in any way, but they just really wanted to keep in touch.  He seemed like a kind, enthusiastic sort of chap but if I want to fill in a card, you can guarantee that nothing will stop me.  I’ll fill in my details when I’m ready, but please don’t hound me until I do.

The exit is just as important as the entrance

It’s lovely to be welcomed nicely at a new church, but what about when the service is over? On a couple of occasions, I have nipped out during the final song, just to avoid any awkwardness at the end. Sitting there solo, as everyone heads to talk to their friends can be embarrassing and uncomfortable.

If you’re the pastor, why not actively seek out new people and go to say hello? Some pastors immediately go to the door at the end of the service so they can say goodbye to people as they leave. Personally, I love this. I feel it shows real pastoral concern. It’s not everyone’s cup of tea though!

Finally, I realise (in conclusion) that this might sound snippy or derogatory. I genuinely don’t want it to come across that way. I LOVE the church. I think it’s incredibly important for believers to be part of a community, a place where they can serve, give and grow. But how your church presents itself to first time visitors, is so important.

The secret to growing a church is a probably a fascinating combination of factors. But when we get the practicalities right and that is blessed by the Holy Spirit, the Church becomes a powerful force to be reckoned with.

And that is just what our world needs. 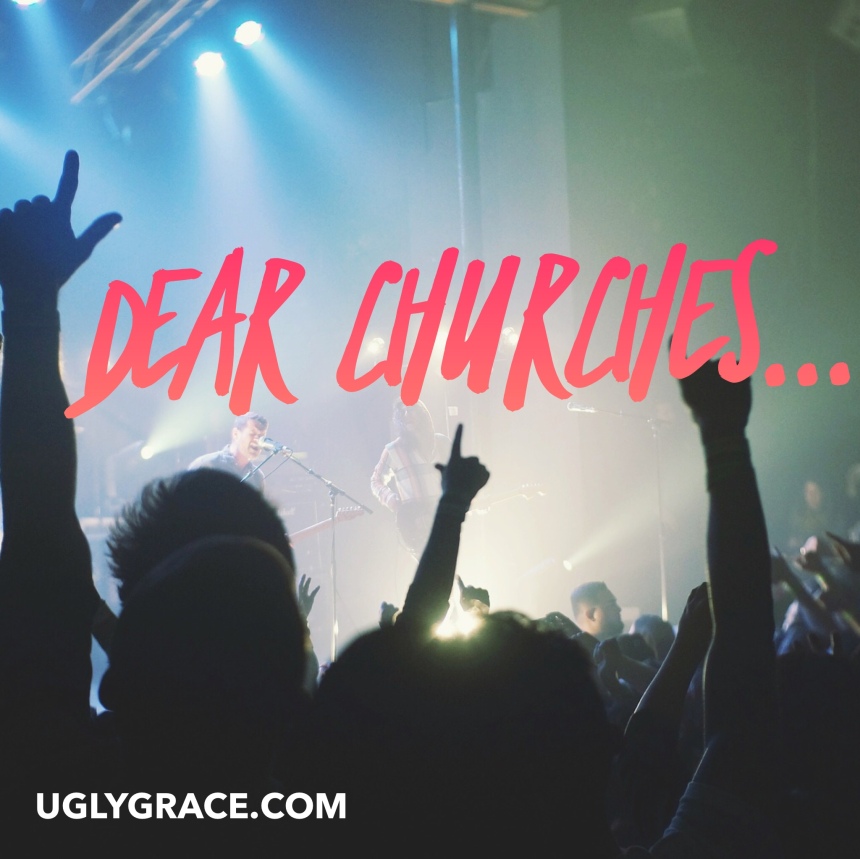