Have you ever had a defining moment, where everything in your relationship with God changed? Shifted in some almost-intangible way?

It might have been the moment when things finally ‘clicked’ for you, the point someone prayed for you? Or it might have been a dream, a vision, or particular church service or experience. But somehow or other, you just knew that your life and understanding of God, began to shift and change when ‘X’ happened?

Over the years, I’ve had a few of those really clear, life-altering, course-correcting moments.

There was the time, when aged 15, I was walking along a muddy Blackpool beach, after attending an unexpectedly powerful youth conference. I’d been prayed for, prophesied over (for the first time in my life) and I remember feeling really overwhelmed by it all. I hadn’t even wanted to go to the conference initially but I’d gone anyway to keep my parents happy.

But the week had unexpectedly changed everything. I’d experienced the presence of God for the first time.

I remember going to the meetings and being so overwhelmed by this new experience of the Holy Spirit, if I could have curled up in a corner and slept in the meeting room all night, I would have done.

I asked Jesus into my life when I was 4 years old, but this, this felt like the moment I really started to get to know him.

That week was incredibly intense. I’d wake up and think about him. I’d go to sleep and think about him and even in my dreams, he was there. I didn’t know what to make of the tornado of emotions in my poor teenage head, but as I trudged along the inky, slurpy sand, I looked up at an overcast sky and shouted into the wind, ‘I’ll do whatever you want me to do. I’ll go wherever you say’.

Of course, that’s easy to say when you’re 15 and don’t have a family or a mortgage or responsibilities, but I meant every word.

Years later, there would come plenty of ups and downs, heartache and loss and once again, I would find myself at the altar of a church, again abandoning myself to this unseen, wild, unknowable and yet knowable God who had never let me go.

At the time, I was processing a significant loss and had gone to the church on a bit of a whim. The preacher was speaking about the ‘God who sees, the God who knows what you’re going through’. At the end, he asked people to go forward for prayer and while I don’t even remember leaving my seat, suddenly I was at the front and the speaker, who-didn’t-know-me-from-Adam was prophesying that God would ‘rebuild the broken walls’ and I would discover beauty in the ashes.

Once again I said to the God who’s always known me, ‘I’ll do whatever you want me to do’. And I still meant every word.

And then in 2016, came another unique experience.

At the time, I was fighting battles on lots of fronts. I found myself in a situation that can only be described as toxic. The word ‘toxic’ makes me think of green, radioactive, bubbling sludge, and that’s how it felt. The circumstances were squeezing the life out of me and yet I couldn’t just walk away.

Sometimes it takes a prophetic word to shake you up and out of the situation you’re in. And that’s exactly what happened. I blogged about it here.

And so, fast forward to some time later, is anything different? Did anything change?

Well, first of all, it’s probably important to say that I’ve since learned that prophecy has a few functions, but one of the most powerful, is its ability to unlock prison doors…the kind our minds create and that cause us to live limited lives.

A genuine prophetic word can be the equivalent of a jailor swinging open wide the heavy, metallic gate you are entombed behind and saying, ‘The door is open. You are free to go’.

And for me, that’s exactly what happened. Something clicked, changed shape, began to alter. Whereas before I was slowly sinking in the swampy sludge of indecision, now I was clear-headed and knew exactly what I had to do.

And surprisingly, I suddenly discovered I had the guts to actually do it. As I walked out of the prison cell, mentally blinking into the freedom of sunshine, I didn’t know what was next but I knew who was with me.

And sometimes (I’ve discovered) walking into the unknown, hand-in-hand with Jesus, can set off a chain reaction you’d never expected.

But you’ve got to take the first step.

So, here I am, months later, in a brand new area, the home I’ve always wanted, free, walking alongside a community of people who are excitedly ‘leaning into the wind’ to see what God has next. None of which would have happened, if I’d stayed locked in ‘prison’.

It’s not anything I did and it’s certainly not anything I deserve and yet, God once again gave me a ‘divine moment’, where suddenly the jail door swung open and I was free to go.

The Gospel, the Bible, the words of Jesus…it’s all about freedom. It’s not about freedom (as culture likes to tell us) to be your ‘authentic self’ but instead, it’s the freedom to be who he sees you as; a dearly loved daughter or son of the unknowable and yet knowable God.

He put himself into a human body to demonstrate what true freedom looks like.

If you feel you’re behind the impenetrable bars of a darkened prison cell, there is hope, on the other side of those doors. 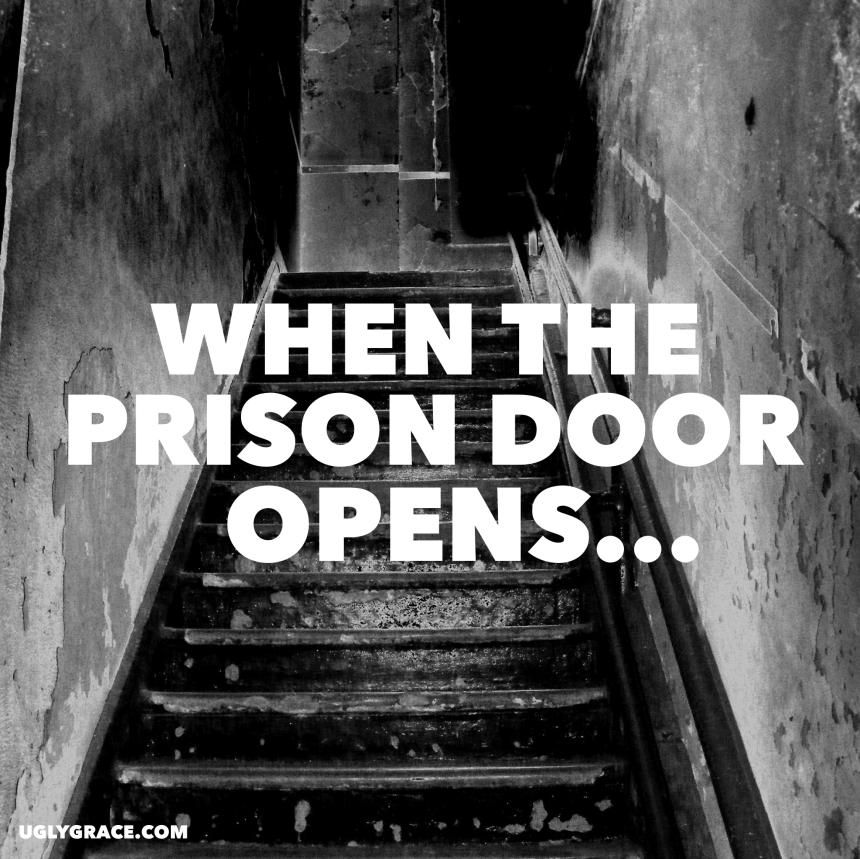 1 reply to When the prison door opens…